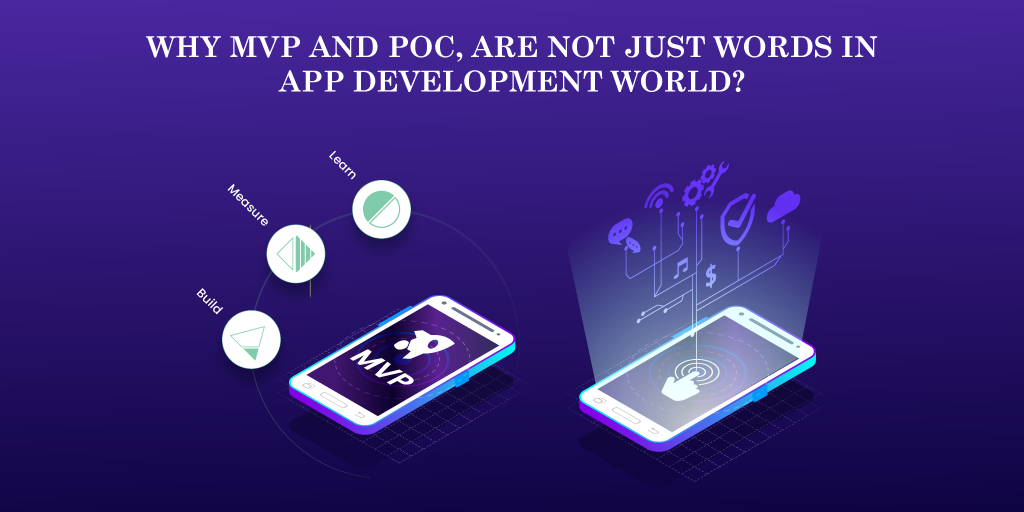 Why MVP and POC, Are Not Just Words in App Development World?

Building an app around an idea might sound an easy job, though reality, it’s anything but easy. To come out with a flawless product that can stand both market competition and expectation, it is vital to do ground research, and test the base product before launching a full-blown, expensive app.
This article deals with two very important techniques that you would love to use to get that desired outcome.
– Proof of Concept (POC)
– Minimum Viable Product (MVP)

A POC is the first step taken towards either building a new product, or towards reinventing an old one. Proof of concept aims at giving validation to your idea, where you make an attempt to see whether or not the idea holds any practical ground. POC is chiefly used when the idea is considered original, but considering the ease that it provides, it is now being used in developing almost all software, both old and new. Proof of concept is not for the customers to use, as it only takes care of the product’s usability and viability in its initial stages. It is only after the developers are done with the proofing, that the product proceeds further.

POCs are a great way to sell a product that is still in its initial stages. proof of concept can get you that sponsorship, you have been waiting long to get for your product. Proof of concept is not the final product, but success at this level is surely an assurance for the future of your product.

A minimum viable product is the final product launched in the market with the essential, but basic features. MVP focuses on creating a market for the app and test its acceptance by the costumers. Once the app is rated successful, more and more features can be added to it. With thousands of mobile apps launching daily in the market and competition getting tough,

MVP can be a great way of reducing risks involved, as developing an MVP does not require a lot of money and time. This means you can reach the market with your final product with minimum investment and less invested time. Even if there’s a chance that your product fails to make a mark in the market, with MVP, at least the damage to your time and money will be less, compared to an expensive final product’s failure. With the success of MVP however, there’s way forward for you.

Both POC and MVP are crucial for the success of your app. They play a vital role in deciding the future of your product. These techniques are easy, consume less time and require minimal budget. Both proof of concept and minimum viable product are a good way of showing your products to stakeholders and investors to chip in funds. MVP can help attract a lot of customers too. These methods give you the courage to move ahead with your app, lessening any imminent threats that can lead to failure. Both POC and MVP, are integral to the process of building a product that is a megahit among your customers.
The most important fact to be kept in mind while making a choice between MVC and POC is the size of the project as well as the target audience. Want to gain more insight on this topic? Or want to get a POC or MVP for your business idea? Request for a free quote or drop in a line on [email protected] for more info!