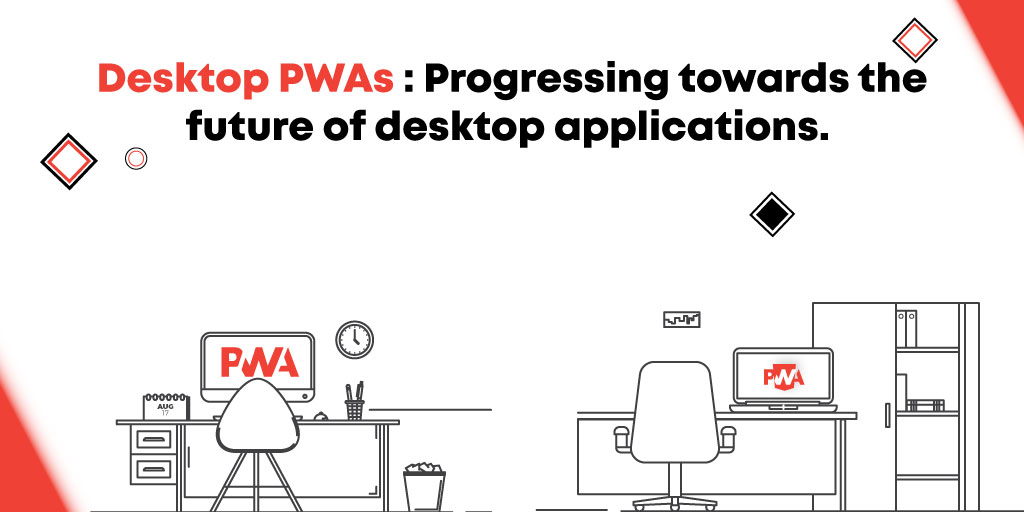 Desktop PWA: Progressing towards the future of desktop applications.

Chrome 70 was released in mid-October 2018 and added several new features including native support for the Web Authentication API, better security features and what we have been waiting for, Desktop Progressive Web App (PWA) support.

If you are not familiar with what PWAs are they are web applications that leverage modern capabilities and best practices to deliver an app-like user experience without losing the advantages offered by the web. In short they are Superhero websites.

Imagine telling your non-techy family member that he or she needs to go to a website to get their next app. No Play Store. No App Store. Just a URL.

But last week’s announcements at Google Chrome Dev Summit 2018 look to bridge the final gaps in PWA development and pave the way for a future where web apps are just as capable as their app store cousins. Let’s take a look at a few things Google announced that are making this a reality.

The move to the open web as an app delivery platform is pretty substantial. The way Google is approaching this is pretty amazing, developing tools that all browsers can agree on is paramount to web apps being the go-to delivery method of the future. In a scenario where Google only makes new toys for Chrome, we end up with a fragmented mess that no one wants to develop for.

With pretty stellar interoperability shaping up, all these new abilities we’re about to look at will eventually work across all major browsers. Google isn’t baking in new features just for Chrome: they are helping to push web development forward for everyone, and that is important.

The minute all browsers support the same functions and abilities, the web becomes the largest, widest, and most scalable platform for development.

Web apps will make this a reality across the board and pave a way for a future where it doesn’t matter what device, operating system, browser or app store you use: one app can be written for them all because they can all leverage the open web.

Desktop progressive web apps can be ‘installed’ on the user’s device much like native apps. They’re fast. Feel integrated because they launched in the same way as other apps, and run in an app window, without an address bar or tabs. They’re reliable because service workers can cache all of the assets they need to run. And they create an engaging experience for users.

Upcoming features as announced by Google –

Here are the main additions that will serve to move PWA development forward:

Web Share Target – This one is fairly simple to grasp. Just like your native apps have native sharing functionality, PWAs will now be able to do this exact same thing across mobile and desktop. So, just imagine the way you’d expect to share from an app on your phone and know that you’ll be able to do the same right from a PWA soon.

Wake Lock – This feature will give apps the ability to keep the screen awake if needed. There aren’t a ton of use-cases that immediately spring to mind, but there are apps that need to keep your device from falling asleep and ruining your experience. PWAs will soon have this ability as well.

WebHID – Right now, the lack of WebHID hinders apps like Square Cash or Paypal from really feeling native since they can’t use your biometric security features. If forced to use the PWA for Paypal, for instance, you currently wouldn’t be able to log in with your fingerprint. WebHID will change this and make for a future where we may finally be able to log in to most web services with a touch of a finger or a scan of our face or retinas.

Writable File API – With obvious user permissions, Writable File API will allow web apps to finally be able to fully access local files on devices. This is a massive step that will allow for all sorts of creative software to be written for the web and interact in a fully native way across the board with things like auto-save. This one is a big deal.

PWA Support For Windows and Mac – Currently, MacOS has no real PWA support. With a target of Chrome 72 (we’re on 70 now), we’ll see full PWA support for MacOS moving forward. Windows has support for this already, but being able to deploy a single desktop app via the web to both Windows and Mac is a big step in the right direction.

Some Desktop PWAs From Big Giants  –

Now you can find your way to home with the lightweight and fast Google PWA. As Responsive and quick as a native app with full functionality.

Starbucks have already adapted the newest platform around the corner. Grab your favorite coffee and view the stores nearby with Starbucks PWA. A fully loaded app with all the information you need.

Twitter has really been setting great baselines for the Twitter PWA on mobile, the installed desktop version is a great compliment to their implementat

So the key takeaway with the bevy of new tools and abilities coming in the near future, it wouldn’t be surprising to see web giants starting to finally return full focus to their web interfaces and shift focus away from their native apps. As larger properties do this, smaller ones will also follow suit.  As the web finally gets to realize its full potential as an app delivery service, the way we use, download, and leverage apps on the web set to change forever.
Considering a development house for your next project? Contact us or drop us a line on [email protected] at Parangat Technologies to discuss your options!