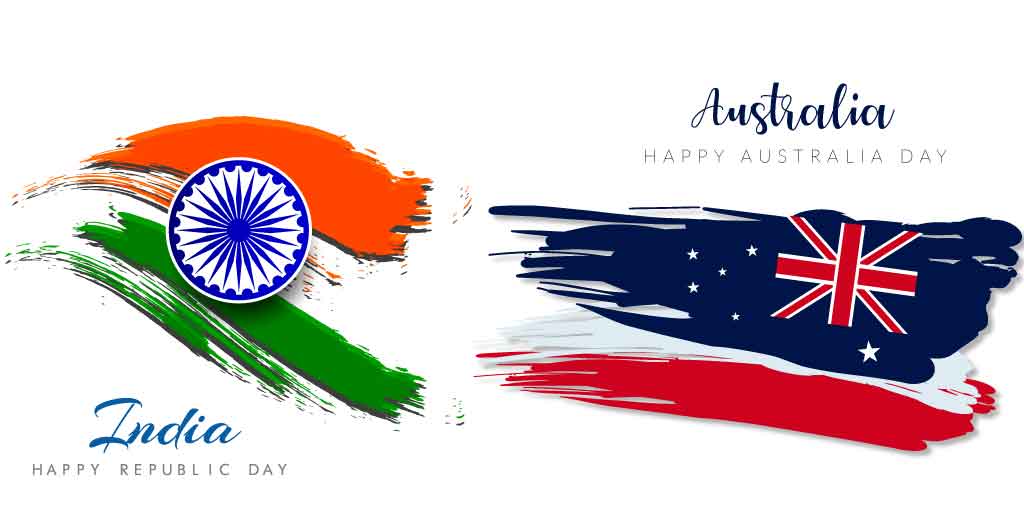 On the 26th of January, India celebrates Republic Day and Australia Celebrates their National Day. It is no less than a coincidence and here we give you a brief about their histories.

Before taking you to ride let’s wish both countries, Happy Republic Day and Happy Australia Day.

The purpose to honor Republic Day, as the 1st time India’s constitution came into force on January 26, 1950, asserting the country’s independent republic. Republic Day embodies the true spirit of independent India. And it has a whole other history. On this propitious day India became independent of the United Kingdom on August 15, 1947. Till that day India did not have a permanent constitution. On January 24, 1950, the national assembly signed the final constitution.

On January 26, 1950, the Indian constitution came into effect. Purna swaraj day was held on January 26, 1930, also the reason for choosing this day. The constitution’s main focus was to grant power to India’s citizens to choose their government. From that day to the present date, January 26 is celebrated with festivities and patriotic fervor across India.

The axiom behind chronicling this day is the landing of the First Fleet in Sydney. On January 26, 1788, which was an armada of naval ships from Great Britain. By 1808, January 26 was being celebrated as “First Landing Day” or “Foundation Day” with drinking and recreation. At this moment Australian get an opportunity to evolve together to celebrate their country and culture. Australis 1st public holiday comes into effect In 1838, i.e on Foundation Day. It was also the antecedent of the first public celebrations of the founding of Australia. After that, It was termed as’ anniversary Day. In 1888, January 26 it was celebrated with celebrations, carnivals, feasts, races, fireworks and the unveiling of a statue of Queen Victoria. On Jan 26, 1946, Australian day came into effect in all states. From that day Australia Day public holiday has been on January 26 in all states and territories.

Now we all are aware of the history behind two countries auspicious day, let’s know what they do and how they celebrate their historical day in their way

How Indians honor and celebrate this day

Our frayed nerves get soothed with a lot of effort and excitement to celebrate this propitious day. Because of the coordinating events and celebrations that transpire on Republic Day in India. To commemorate soldiers who sacrificed their lives for their country. The event starts with India’s prime minister laying a wreath at the Amar Jawan Jyoti at India Gate. A grand parade is held in New Delhi and large military parades are held, where Deputies of the Indian Army, Navy and Air Force and traditional dance troupes of every state take part in the parades.

During the parade, India’s president takes the military salute in New Delhi while state governors take the military salutes in state capitals. On Republic day A foreign head of state is invited as the president’s chief guest. Awards and medals of intrepidity are provided to the people from the armed forces and also to civilians. Armed forces then fly helicopters, past the parade area showering rose petals on the audience. Not only our army but our students participate with great enthusiasm by taking part in the parade by dancing and singing patriotic songs. The Armed Forces group also showcases motorcycle rides. And; lastly, with a “fly past” by the Indian Air Force, it concludes which involves fighter planes of flying past the dais, symbolically saluting the president. These leave trails of smoke in the colors of the Indian flag.

On this celebration day, people of Australia have a day off work and use the day to picnic in a park, or to go shopping or to play or to watch sports events. In most parts of Australia, particularly Lake Burley Griffin, striking public fireworks displays are held. Along with fireworks, the Australian of the Year Awards is presented. These awards are presented to Australians who have contributed to the community or country. While in some towns citizenship commemorations take place, these customs are celebrated to welcome immigrants to the country who now held granted Austrian citizenship.

Australian join local council events across Australia. Representing local bands, food, and beverages, Citizenship commemorations by enduring a public fireworks display for all to enjoy. Observe the sky burst with life and color, ending your Australia Day with an experience that leaves you with a little belief in magic and wonder.

So lets the foundation of relationship get stronger between two countries through ignoring ebb and flow and by celebrating this auspicious day in our historical way.