12 Reasons Why Low Code Is The Future Of Application Development 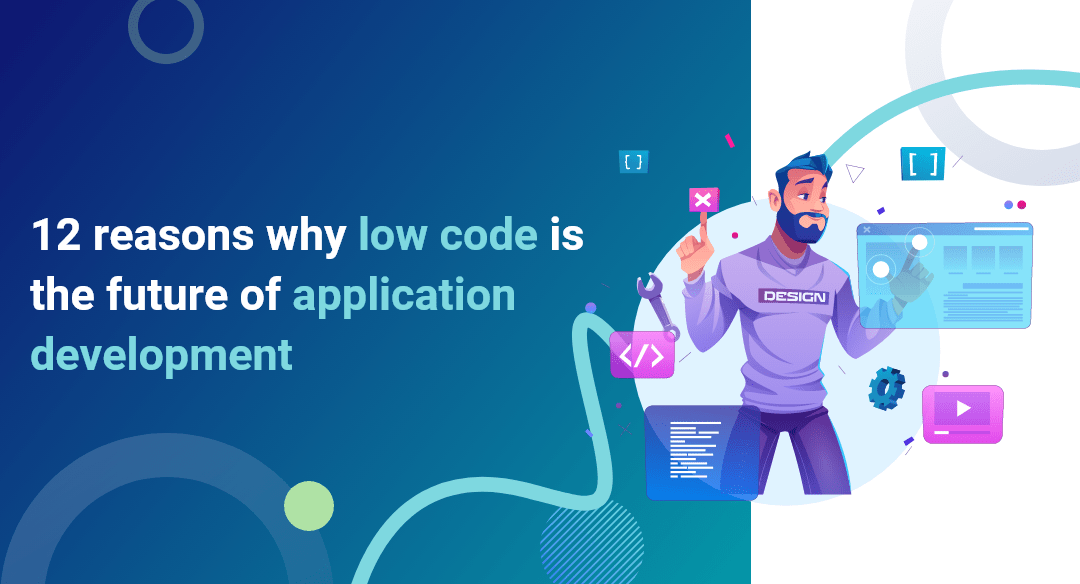 Today, low code is not merely a buzzword; it has become an industry reality.  Industry reports have predicted that by 2025, the low-code market will be worth $45.5 billion. In this context, low code can be safely predicted to be the future of application development.

But the question is, why is low code technology gaining prominence at such a lightning speed? Why is it that business leaders are going gaga over low-code technology? To understand this, first, you need to know the answers to the following questions –

Let’s address the first question: “What is low-code development?”

Until recently, application development had been considered the niche of IT professionals. It has been a popular belief that for developing an application, you need to be a trained IT professional and must have a sound knowledge of the coding system. Contrary to this belief, low code enables people with minimal knowledge regarding app and software development to create apps in a graphical/visual way by simply using drag-and-drop functionality. As the name “low code” suggests, it needs fewer lines of coding while building an application.

With low code, you can build apps without the assistance of a team of coding experts. This sounds unbelievable, right? Well, it’s just the tip of the iceberg. Read on to learn more about low code technology.

In this fast-paced digital scenario, leaders and specialists in companies are looking for solutions to integrate different teams and be in constant touch with their consumers.

Low-code technologies were already rising, but the covid pandemic and the resultant lockdown catalyzed the need for low-code technology. Due to the widespread lockdown, no new app developers could be hired. However, the demand for various apps is still high.

In this context, low code development has become more important than ever.

In traditional software development methods, programmers need to write long strings of code to create the desired function in computer programming. But this method requires skills in software development, development environments, deployment processes, and testing the application. Low-code platforms condense all of this work under the cover of a user-friendly graphical UI. To develop the computerized workflow, a user can use reusable components via the drag-the-drop method, which is nothing but visually represented code.

Low-code technology can be handled only by those who have a basic understanding of the app development processes. This technology is primarily used to develop apps responsible for running critical business processes or for apps in portals that likely require integration with other systems and sources of data.

One of the most important reasons contributing to the steady popularity of low-code solutions is that it enables anyone having a bare minimum knowledge of software architecture to develop and deploy apps. This, in turn, saves both time and money for their organization. Low-code technology can be used by business analysts, office administrators, and small business owners. 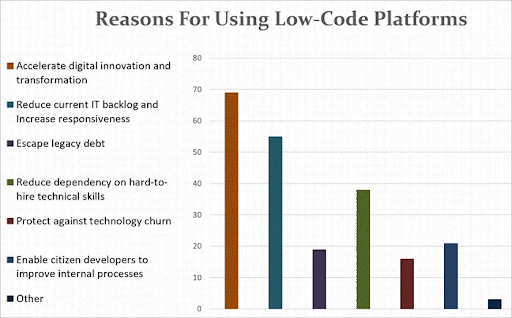 Now, to back up the claim that low-code development is the future of application development, let’s look at the trends in the low-code market:-

Low code is the future of application development: Top 12 reasons

Have you ever thought about where the lion’s share of the IT budget is each year? Well, it is spent on the maintenance of systems. This leaves a company with almost no funds to start a new and futuristic project. This problem can be solved by adopting a low-code app development method.

The low-code method significantly reduces both application development and maintenance costs. It eliminates spending a lot of money on professional app developers. This is achieved by enabling citizen developers to build apps using low-code platforms.

Citizen developers have the basic knowledge to create applications but are not professionals in this field. Hence, apps can be by members outside the technical team. This method is cost-effective as the expenditure on low-code platforms is much lower than financing a team of permanent app developers.

2. Speeds up the application development process

In today’s digital scenario, you must adapt quickly to market shifts to beat competitors. To remain agile, you must significantly reduce the time consumed in developing and modifying various applications. The low-code development process is many times faster than traditional app development methods.

Statista conducted a survey at the end of the year 2020 on a class of 1022 leaders, who are variously connected with business and IT, to ascertain whether they consider low-code as faster than traditional application development methods or not. The report goes like this –

Thus, more than half of the leaders consider app development using low-code platforms less time-consuming than traditional app development methods. Reduced app development time will thus be saved and can be focused on developing other aspects of the project.

Compared to traditional application development and coding methods, which usually have a larger number of bug issues,  low code development, which requires a lower amount of coding, reduces bug issues drastically. An application can be developed in less time and more efficiently with fewer bug issues.

Did you know that an astonishingly high number of IT projects are likely to fail due to various challenges such as cost, ambiguous expectations, and strict deadlines? Do large IT projects have an astonishingly large rate of failure? But how can this failure rate be curtailed, and where lies the solution? Well, low-code app development is the key to solving this problem.

Low code speeds up the app development process without hiring costly IT professionals. This helps the business firm complete its projects before the deadline ends. The possibility of failure due to output not matching customer expectations is also eliminated because business users themselves design applications utilizing low-code no-code.

Low code development has many features. Let’s consider a few of them-

The best thing about low code is that it is easy to use. Since complex coding procedures have been done away with, people with basic app development knowledge can also innovate.

Gone are the days when app developers had to manually write an application’s code and then put it through a test run to prove their efficiency.

Now, various low-code platforms help you to quickly build prototypes by using the prebuilt components. These platforms allow the app builder to clearly understand what needs to be added and what needs to be shunned. You can now build and test run various app models in a short period without having to put in a lot of effort.

Instead of presenting your idea in a PPT presentation, you can have a lot more impact on your team of stakeholders by showing them a working demo version of your idea within a few days. This boosts the rate of innovation.

Low-code platforms can be used to write one codebase and then deploy it across various operating systems without having to modify it.

Low code enables you to develop an application and deploy it across various devices such as smartphones, desktops, laptops, and tablets. This cross-function deployment also means that adding new features or modifying the existing features can be done once and for all.

Low-code uses a simple coding method. The non-IT members can use the already built and pre-tested models to innovate and develop various apps and solve real-time issues plaguing their company. They no longer have to depend solely on professional developers, increasing productivity.

A recent analysis conducted by Bain & Company has shown that organizations that provide better customer experience generate revenues 4-8% above their market average. You must focus on customer satisfaction to excel in this highly competitive market. Using low code, you can develop various mobile apps, IoT-enabled smart applications, and web portals per consumer demands. You must know your customer’s needs and build apps accordingly to succeed. To do this, you can use the team closest to your consumers to understand the demands of your customers. This team can develop apps independently or collaborate with professional developers using low-code platforms.

These application components can be seen as a common language that is understood by the business team and app developers teams.

These inbuilt visual modeling tools allow even non-IT personnel to build and deploy apps. This not only saves time but also makes the process of app development much more accessible.

In the post-covid scenario, many employees are still working from home. A significant drawback of this situation is that it hampers collaboration between teams in an organization. This delays new app development as well as preexisting application modification procedures. Low code development can solve this problem. It provides a common platform for teams across an organization to collaborate. They can develop, launch and modify an application and software with the help of visual modeling techniques.

Low code platforms also help the subject matter experts and business analysts contribute jointly to the app development procedure. On the other hand, since the low code platform has automated the code creation method for all the core elements,  the technical teams can focus more on innovation.

Low code also empowers citizen developers to build new or modify existing applications using IT-approved technologies. Citizen developers are non-technical users who belong to various lines of business and have a knack to engage in application development, even though they lack formal training in coding. Hence, this enables both IT and non-IT staff to join hands in developing an application. This collaboration no doubt boosts app development’s speed and divides the workload among IT and non-IT staff.

Low-code platforms come with built-in and pre-tested models. Hence, you do not have to develop an application from scratch. You can reuse and assemble these building blocks to build flawlessly functioning and visually appealing products.

When made available in the market, these products will generate more qualified sales leads, thus better revenue. These apps have lower risks of failure and can deliver superb results.

In addition to this, low-code technology is highly stable and secure. This means that the already operational low-code platforms are less risky and hence, more user-friendly.

Low code development has smoothened out ever-changing consumer demands, and the emerging market trends make it imperative to modify and update existing applications and software. Low code has done away with complex coding and has mostly automated the app development procedure. Hence, you can quickly and immediately incorporate the required changes in a previously built app when called for.  Organizations can immediately respond to and address fast-changing business trends with this technology. It makes the app development procedure flexible.

Low-code: The Future Of Application Development

There can be no doubt that low code is the future of app development. In the years to come, many new software applications will be developed using low-code technology. Moreover, as you can see, the list of advantages of using low-code technology runs long. It drastically cuts down application development costs and can also be used by novice app developers.

Now that you have been initiated into the benefits of using low-code technology for developing applications instead of the traditional app development method, you are surely craving to know more about low code. Connect with Parangat Technologies to learn about low code and why you should use low code for your next project.