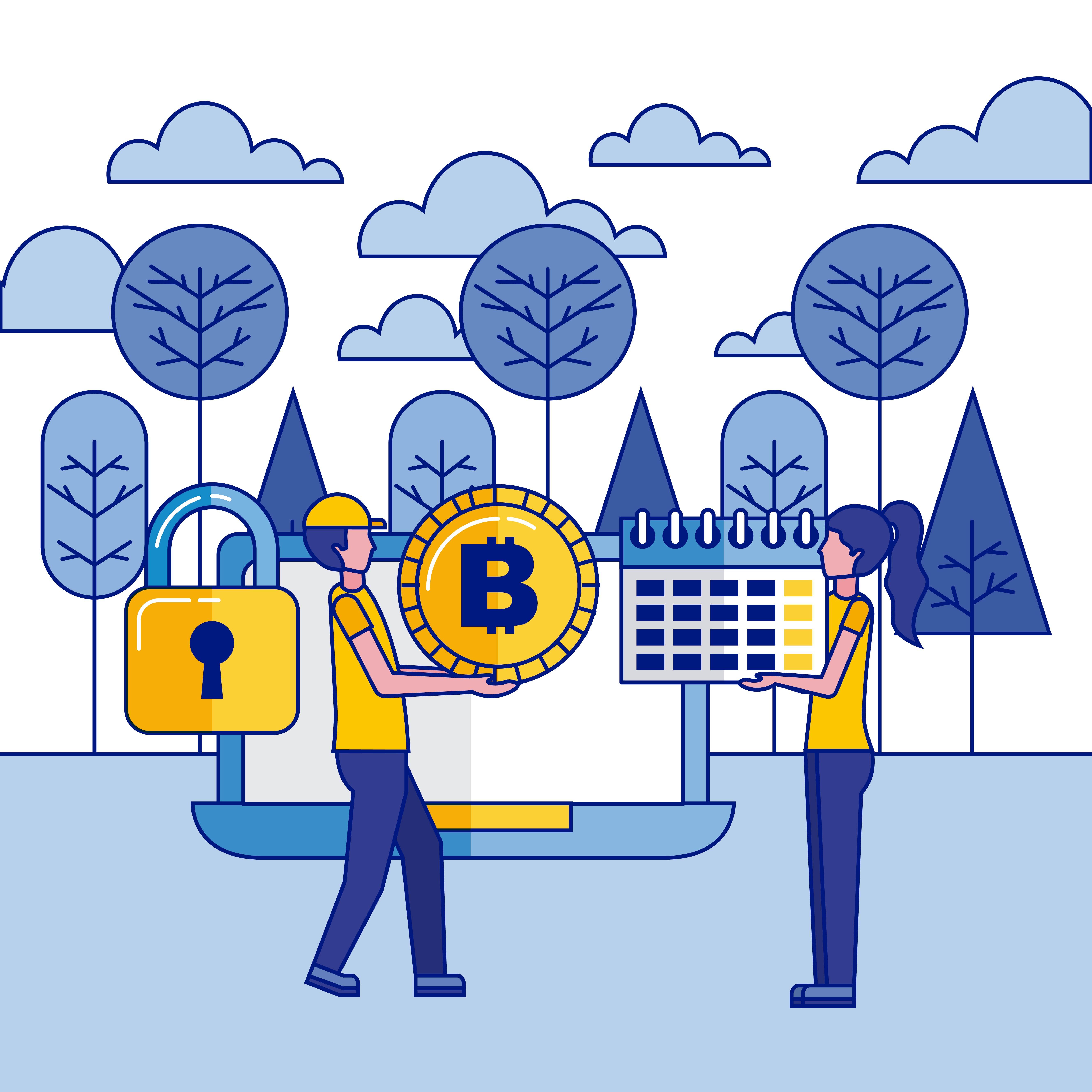 As the world progresses towards extremely transparent and highly robust distributed ledger technologies (DLTs), many blockchain alternatives are emerging. These DLTs also facilitate the maintenance of transaction data records and are being gradually adopted by organizations across the globe.

One such distributed ledger technology is the Hedera Hashgraph. The technology is gaining momentum gradually because of its efficiency, speed, and security. In fact, people that are using it also claim it to be better than blockchain technology in these aspects.

So, which one is actually better? And, if you are using blockchain technology for your apps and processes, do you need to worry about the increasing popularity of Hedera Hashgraph?

Below, we explore the answers to these questions and present a thorough Blockchain vs Hedera Hashgraph comparison analysis.

So, take a thorough read and get the best insights from the industry experts.

The key concept of Blockchain technology is the blocks that store data safely, such that this data cannot be changed or manipulated in any way. Blockchain derives its strength from its ability to offer transparency, privacy, immutability, and security.

Some other distinct features of blockchain are:

So, all the people in a blockchain network can perform transactions, see and maintain a true-for-all view of all the records and adhere to the norms of agreement via smart contracts.

Take a look at the following image for a better understanding:

However, the technology also suffers from some drawbacks, such as:

Now that we have had a detailed overview of Blockchain, let us move on to explore the Hedera Hashgraph.

What Is Hashgraph Technology?

Hedera Hashgraph is a faster and more secure DLT that is gaining recognition as a reliable and robust alternative to blockchain. The technology overcomes the operational shortcomings of blockchain, the energy-intensive mining, and uses a novel technology called Directed Acyclic Graph.

Hedera Hashgraph is not like blockchain, which is built on a chain of blocks. You can understand Hashgraph as a graph, whereby the transaction verification speed goes up with more transactions being added to the network.

Hedera operates as a directed acyclic graph, the technology that enables the platform to complete more than 100,000 transactions in one second. Hence, it is one powerful competitor to mass-market payment systems, such as VISA.

Take a look at the following image to find a basic comparison between Hedera and other DLTs:

Some other distinct features of Hedera Hashgraph are:

Hedera is designed to facilitate running fast apps in a secure and fair manner by using the efficiency of Hedera Hashgraph on a public network (decentralized) that you can trust.

Core benefits offered by the Hedera Hashgraph technology are:

Up next, we present an in-depth comparison of Hedera Hashgraph and Blockchain technologies.

We offer an insightful Blockchain vs Hedera Hashgraph analysis that will help you enhance your understanding of both technologies. You can find a comparison of both the technologies on various parameters to develop a holistic impression of their pros and cons.

Based on your reading, you can make a better and more well-informed decision regarding which technology suits your development requirements in the best manner.

Though both the technologies stand a strong ground in terms of security, Blockchain has a different approach for implementing and utilizing cryptographic methods for securing data transmissions and storage in the network.

All the digital blocks on the network are tamper-proof and cannot be manipulated or leveraged by malicious actors in any manner.

Hashgraph, on the other hand, has the “Asynchronous Byzantine Fault Tolerance (aBFT)”, to ensure the safety and security of the entire network from hackers and attackers. All the events happening in the network are recorded such that even if there is a malicious actor in the network, no tampering can be done in any manner.

So, when it comes to security, the Blockchain vs Hedera Hashgraph scenario has a strong tie.

This is one area where Hedera Hashgraph is better than blockchain. While the overall speed of Blockchain depends on various things, such as cryptocurrency, platform, etc., it is way slower than Hashgraph.

Theoretically speaking, Hashgraph can deliver a speed of about 5,00,000 transactions per second but this can also vary depending on certain factors. Hedera Hashgraph derives its speed from the Gossip method, in which less information needs to be transferred across the entire network as more events occur.

Because of its directed acyclic graph (DAG) approach, Hedera Hashgraph is 100% efficient. On the other hand, Blockchain utilizes a block approach, which makes it hard for miners to work. This is because sometimes when two blocks are mined simultaneously, the miner’s community must decide on keeping one block while the other one is discarded.

This is a sheer wastage of efforts and resources, making the Blockchain network less efficient.

On the other hand, Hashgraph technology doesn’t create blocks but only events and faces no such problems.

Hence, the efficiency of Hedera Hashgraph is better than blockchain.

While blockchain is fairly adaptable and this is why it is getting more and more recognition and audience across the world, it is more effort-intensive. It might become a bit costlier for extremely complex and dynamic ecosystems, such as financial ecosystems and public infrastructure.

Hedera Hashgraph, on the other hand, offers higher efficiency and is more easily adaptable.

However, the adaptability might vary for both the technologies from one scenario to another. Hence, in this area as well, there is no significant difference.

Hedera Hashgraph offers more fairness as compared to Blockchain. The technology offers fair access, fair ordering as well as fair transactions per second. And precisely because of these characteristics, Hedera Hashgraph is currently the fairest platform available in the market. All the nodes are allocated randomly and the technology also uses consensus time-stamping that ensures that no person on the network gest affected because of the order of transactions.

In the case of blockchain, the miners have more power for order selection, processing and can even stop transactions. And, this is not entirely fair to all the members that are directly or indirectly connected to the network.

Blockchain offers three levels of accessibility – public, private, and hybrid. So, the technology is accessible to anyone who has been given permission to view it, as in the Bitcoin Blockchain scenario.

Hedera Hashgraph offers public and private levels of accessibility. Also, Hedera Hashgraph is a public permissioned network. This implies that anyone can build the Hedera network, but only specific parties are eligible to run network nodes, manage the consensus and maintain the network.

However, there are various perceptions about accessibility and the user experience might vary from business to business, as shown in the following table:

Blockchain has a block-based approach, which makes it harder ad more difficult for the users to use the technology.

Hedera Hashgraph uses the directed acyclic graph to store and access information. Hence, it is easier, faster, and more efficient.

Both the Blockchain and Hedera Hashgraph use consensus mechanisms that are different.

Hedera Hashgraph Hedera works on a graph-like structure and all the information or data is stored in events.

Here, the consensus relies on:

As the Hedera Hashgraph consensus allows the developers to create verifiable timestamps and ordered events for any application, it offers multiple opportunities for a wide range of applications, such as:

In this area as well, Hedera Hashgraph proves to be better than blockchain as it is fairer, more efficient, and more secure.

In fact, even if a malicious actor finds his way inside the system somehow, they cannot alter or tamper with the data in any manner.

Blockchain doesn’t use the Byzantine Fault Tolerance system for ensuring security and is less secure than Hedera Hashgraph.

The Blockchain vs Hedera Hashgraph comparison makes blockchain a winner in this regard. Blockchain is a completely open-source project, which means that you can contribute to its core and make changes in the code base whenever the need arises.

This makes it possible for businesses of all types to use blockchain for various applications and business use cases.

Hedera Hashgraph technology is patented and not open source. Hence, the developers cannot fork the protocol for creating their own public versions, such as Bitcoin Cash and Bitcoin SV.

Below we represent a tabulated differentiation of blockchain vs Hedera Hashgraph to offer a comprehensive analysis:

Will Hashgraph Replace Blockchain: Looking Into the Near Future

While Hedera Hashgraph offers a wide range of functionalities and is more secure and efficient as compared to Blockchain, it is unlikely to replace blockchain. Also, it is a patented code and this reduces chances of swift and significant adoption across various industries.

Further, blockchain adoption is aggressive currently and more and more people are investing in private and hybrid blockchains.

Hence, it is not going to be replaced by Hedera Hashgraph or another such emerging tech in DLT for quite some time now.

So, if you are planning to get started with any one of the two DLTs, the best course of action is to take expert consultation. At Parangat, we offer a thorough and reliable consultation and project ideation to take your blockchain ventures towards successful completion.

To get started and to know which DLT works best for your venture, please book your consultation today!