How to Choose a Blockchain Platform that Speeds your Business Growth 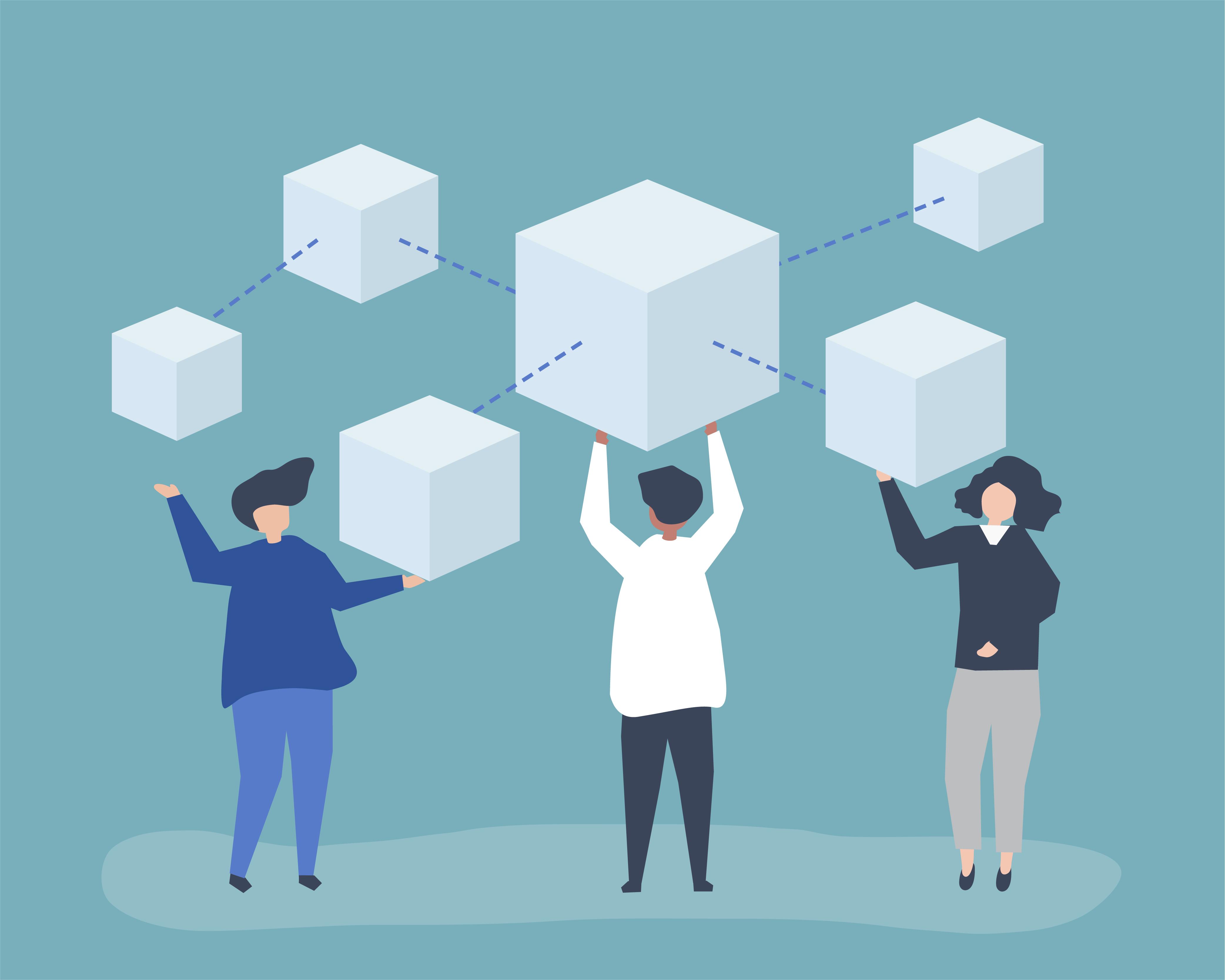 Blockchain technology seems to be picking up speed these days. The technology that emerged as Bitcoin in 2009 has become a mainstream technology. Blockchain has uses in a variety of industries including healthcare, supply chain, logistics, law, and more. Blockchain applications are exemplary in making business processes more efficient and transparent.

As organizations have initiated to experiment with the potential of the blockchain by developing blockchain applications, the demand for blockchain platforms has gotten beyond comprehension.

One of the polls shows that the global blockchain market is expected to grow from $ 3 billion in 2020 to $ 39.7 billion in 2025, with a CAGR of 67.3% in 2020-2025. Therefore, the need for blockchain platforms is increasing in order to build the blockchain-enabled ecosystem securely and quickly.

What are Blockchain Platforms?

Blockchain platforms enable the development of applications based on blockchain and let users leverage the benefit of distributed ledger technology. Ethereum, Hyperledger, R3, Ripple, and EOS are some names that have built blockchain frameworks that enable people to develop and host applications on the blockchain.

Take a look at the following image to understand the functional framework of a blockchain platform:

The Tron platform can process 2000 transactions per second, which is the same as large payment processors like PayPal. There are no transaction fees.  Tron relies on the PoS consensus mechanism to secure the blockchain. A DPoS is similar to a proof-of-stake consensus mechanism that allows users to generate passive income by placing their stakes on a network wallet.

Founded by J. P. Morgan, Quorum is a corporate-centric version of Ethereum. It modifies the Ethereum core and thus you can integrate Ethereum updates smoothly and quickly.

Similar to Ethereum, Quorum is also open source and can use the blockchain platform free of charge over the long term. Unlike other blockchain platforms, it uses various voice-based algorithms to process hundreds of transactions per second. Authorized networks are not open to everyone because they can handle applications that require high-performance processing and speed of private transactions.

Quorum solves the record confidentiality problem that Ethereum and other blockchains failed to address in the introduction of private and public on-chain transactions.

Founded in late 2013, Ethereum is a blockchain-based, open-source distributed computing platform proposed by Vitalk Buterin, a 22-year-old Russian-Canadian programmer. Ethereum is known for running smart contracts on a custom blockchain. Contracts on Ethereum. Every node within the network must be running an EVM implementation.

Although Ethereum is widely used by corporations, it is important to understand that Ethereum is a public (permissionless) blockchain platform designed for restricted access versus mass consumption. It’s also a PoW (Proof of Work) -based platform that is comparatively slower in terms of speed. But it could change its consensus algorithm to Proof of Stake in the years to come.

Ether is a native Ethereum cryptocurrency used to power the Ethereum ecosystem. A developer building application using Ethereum must pay fees in Ethereum to execute transactions and run applications on the Ethereum network.

Originally developed by the financial industry for the financial sector, Corda is now used in various other use cases such as healthcare, trade finance, supply chain, and government agencies.

More than 60 companies, including Intel and Microsoft, use Corda as their blockchain platform. HSBC, Intel, Bank of America Merill Lynch, and dozen other institutions have invested approximately $ 107 million in R3 Corda.

Qtum is a cryptocurrency that combines the smart contract functionality of Ethereum with the security of Bitcoin’s unspent transaction exit model (UTXO) to create a platform suitable for adoption by large organizations. Qtum became 2016 by Patrick Dai, Jordan Earls, and Neil. founded Mahl, and their Initial Coin Offering (ICO) took place in March 2017.

A core element of Qtum borrowed from Bitcoin is the UTXO model, a type of accounting system used by Bitcoin that offers a high level of transaction security. Provides a type of receipt for coins that have not been issued after a transaction. Qtum copied and modified the Bitcoin UTXO code for its own platform.

Qtum borrowed smart contracts from Ethereum. Smart contracts are self-executing blocks of code that, once verified on the blockchain, meet the terms of the deal, making the contract irrevocable.  As of October 2021, the coin ranked 91st in the total market cap, with the price fluctuating around $ 13.45 on a market cap of $ 1.4 billion.

Stellar is a blockchain-based distributed ledger that is used to facilitate cross-asset transfers. Similar to Ripple, it can also handle exchanges between cryptocurrencies and fiat currencies. It is possible to create banking tools, smart devices, and mobile wallets through the Stellar network.

Stellar Consensus Protocol (SCP) enables a consensus to be reached without relying on a closed system for recording financial transactions. Through a series of verifiable security properties, SCP optimizes security over the entire service life by stopping network progress until a consensus can be reached. can be reached if the nodes or partition are not functioning properly. Compared to decentralized try-and-test algorithms, SCP has modest computational and financial requirements, which lowers the entry barrier and opens the financial system to new entrants.

SureRemit uses the Stellar blockchain to connect immigrants abroad with merchants who provide the services needed by loved ones in another country. Many other companies such as Transfer To, NaoBTC, RippleFox, and ICICI Bank are integrating into the Stellar network to enable swift cross-border money transfers.

Launched as open-source software in June 2018, EOS is a blockchain platform founded by a private company, Block. one, designed to develop dApps (decentralized applications). The company has distributed 1 billion ERC20 tokens to ensure widespread use of the cryptocurrency. and allow everyone to use the EOS blockchain after its launch.

The aim of the platform is to offer decentralized application hosting, decentralized storage of business solutions, and intelligent contract capacity, solve the scalability problems of Ethereum and Bitcoin, also eliminate the fees for all users.

EOS achieves consensus through the use of multithreading and a delegated correction algorithm. They have their own community forum called EOS Forum, which allows developers and investors to discuss the platform and the EOS Talk for their users based on the Steem blockchain.

Hyperledger Fabric is another Hyperledger project that aims to create blockchain-based solutions or applications with a modular architecture. The modularity of the architecture enables network designers to combine their preferred components such as membership and consensus services and thus differentiate them from other blockchain solutions.

The Hyperledger Fabric framework was developed for authoritative networks and enables the participation of known identities within a system. Participants within this network must be authorized and credible in the capital in order to participate in the blockchain. Digital Asset and IBM initially contributed to the Hyperledger Fabric platform as a result of the first hackathon. Blockchain companies prefer to build enterprise-class applications using this blockchain platform.

Founded by the Linux Foundation and contributed by IBM and Digital Asset, Hyperledger Sawtooth is a modular, enterprise-class platform designed to create, implement, and run distributed ledgers that enable digital recordings without a central authority to manage.

Sawtooth’s Elapsed Time Test (PoET) consensus mechanism enables Hyperledger Sawtooth to integrate with hardware security solutions known as “Trusted Execution Environments,” and Intel’s recently released Xeon processor is one of its applications. It is the second open-source blockchain platform from Hyperledger that can be integrated into an enterprise version 1.0. The release of Software Solutions 1.0  is essential for all developers as it suggests that maintainers will continue to focus on the main functions. confident that whatever they build won’t break due to future upgrades.

Hyperledger recently announced the release of Sawtooth version 1.1. They previously released Sawtooth 1.0, which marks the platform’s production status. In the new version, however, they introduced support for Smart Contracts and an improved consensus interface.

The OpenChain platform was developed by Coinprism, a company behind the Open Assets standard for colored coins. OpenChain is an open-source distributed ledger technology that is well suited for companies that want to manage digital assets securely and at scale. In contrast to the consensus mechanism used in Bitcoin, it uses the Partionned Consensus, in which an instance only has a single authority for transaction validation.

Since there is no miner in OpenChain, transactions are free and can be validated by the asset manager, which makes it more efficient than other platforms.

This brings us to the completion of our discussion. For choosing the right blockchain platform for your business needs, please book a demo with our experts today!