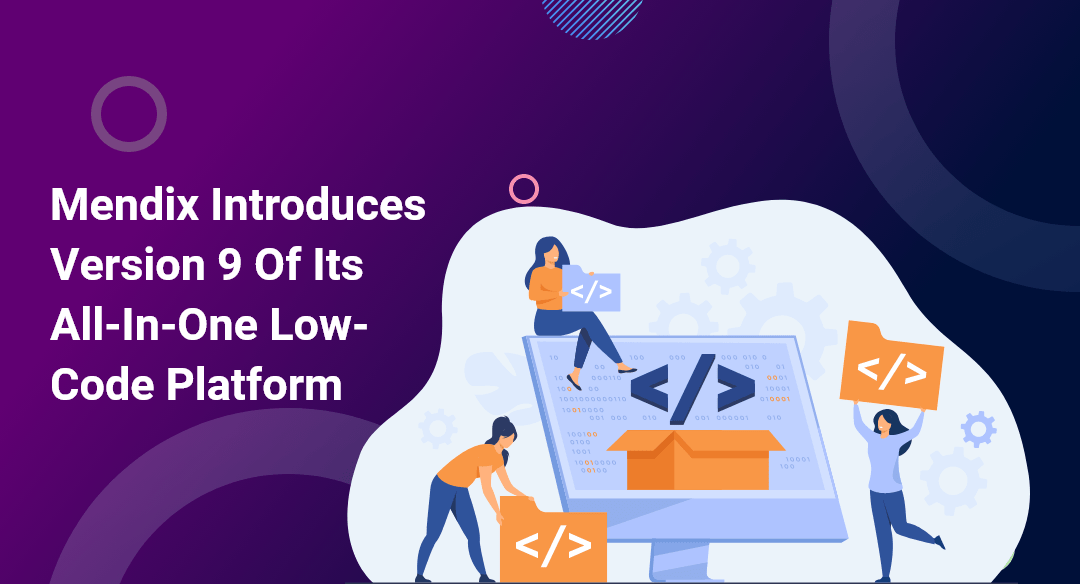 Enterprise software development trends are frequently evolving. An emerging trend nowadays is deploying Mendix-9 low-code platform applications to cultivate optimum benefits! But why?
Fine-gained conflict resolution
Low-code application development platforms are a graphical approach to developing software using little to no real coding. At a time when customers want their services in a digital-first environment, employees require better tools to execute their jobs, and corporations have realized that extensive digital transformation is the cornerstone to long-term survival and success, use of Low-code platforms hiked to 94% in 2022 from the previous 77%. Moreover, the global low-code market is estimated to produce $187 billion in revenue by 2030.

Mendix, a Siemens firm, is gradually becoming the centerpiece of this digital landscape. The global release of Mendix 9 has once again upped the bar for low-code application development with a slew of exciting new features designed to stimulate productivity. Leading industry analysts have recognized this cloud-native, open, agile, extendable, and proven platform as a pioneer and visionary.

What precisely makes it stand out from the other low-code application development platforms? Read ahead to discover what additional perks Mendix 9 have and why it is the best low-code platform for developers and companies!

Speeding up the digitalization of user interaction and embracing a dispersed workforce define the new normal. It is a good thing that these are the central themes of the latest low-code application development platform Mendix 9!

Mendix has enhanced the system with several features resulting in more productivity and efficiency than ever! This version of the system has a few more features than before. Each of these features helps Mendix users have a better experience. For instance,

Case management or workflow logic is a prerequisite of every other project. However, the previous version of Mendix did not offer workflow automation. Mendix Studio Pro accompanies a workflow editor as a Beta feature with version 9. The efficient workflow Mendix 9 features guarantee is one of the most sought-after advantages because:

Task Queues thus allow microflows and Java operations to operate while permitting you to control the maximum load. It also enables you to execute microflows with a retry mechanism so that if or when one fails, Mendix will automatically retry it every x minute until the task is completed.

The Mendix 9 platform features a new merge algorithm, which is enabled by default. It is used when performing an update or a merge to combine changes in the application. The new algorithm outshines the previous one in the following terms:

You no longer have to pick between entire documents when there are conflicting modifications to a single document. You can resolve conflict at the specific elements like attributes, entities, data reviews, and microflow activities. Moreover, the fine-grained conflict resolution instantly accepts and forwards all your non-conflicting modifications.

Mendix 9 enables parallel changes to widgets without leading to conflict. When two developers insert a widget in the same data view, the old algorithm requires you to go with one of these changes. The new algorithm, however, offers a list order conflict to remind you to determine the final order of widgets if the changes are very close.

Evaluating conflicts is easier now because the Mendix 9 low-code platform consolidates the lines referring to the same element. Mendix 9 offers no toggles for “Change in mine/theirs.”

Mendix 9 platform features an easy way to filter and curate the list with minimal or no coding from your end.

MxAssist Performance Bot was created by statistically analyzing hundreds of anonymous Mendix apps to comprehend prevalent anti-patterns. It employs Mendix Expert Services’ best practices in developing microflows, domain models, pages, and security. It identifies anti-patterns during design and development, highlights them for you, recommends solutions, and automatically eliminates these problems. It improves your app’s performance by assessing your model against Mendix development best practices.

The bot feature assesses the application, locates the issues, and notifies you about the document or element behind the problem.

The bot then explains the identified problem, its impact, and ways to fix it.

The bot automatically leverages and implements the best strategy to fix the issue once you acknowledge the problem.

Atlas UI has been updated as part of Studio Pro 9.0. Atlas UI 3.0 has a new feel and appearance, simplified customization, and enhanced out-of-the-box templates. Moreover, its new folder structure makes updating and extending your theme much easier.

Atlas UI has grown significantly in Mendix 9 low-code platform, from using Calypso to compile SCSS files to modifying SCSS and JS files directly in Studio Pro. Mendix 9 eliminates the need for an external editor and simplifies the work process:

Text templates are multilingual and allow you to input a formatted attribute value. However, there are situations when greater power is necessary than what an attribute can supply. What if you wish to pluralize a word? For example, “You picked one product” versus “You picked two products”) or insert language based only on logic?

Mendix 9 low-code platforms have made it simpler for you! You can use expressions as text template parameters. With logic (if-then-else), functions, retrieval through associations, and the context of parent data views, you now have access to the entire power of client-side expressions.

Mendix Studio Pro 9 supports the creation of offline-first Progressive Web Apps (PWAs). PWAs, like native mobile applications, include offline-first features, but they do not need you to publish your app in any app store. Mendix 9 low-code platform accompanies multiple eye-catching PWA features to stimulate application development. For instance,

The offline-first applications using PWAs make it simple to access data dynamically from a data source. End users can quickly add a Mendix PWA to their home screen on iOS and Android devices using the new PWA capabilities. It makes it simple for end users to restart the app and gives it a more native-mobile feel by displaying a splash screen and obscuring browser controls when launched.

Offline-first PWAs keep users signed in for extended periods. However, it automatically logs out users after 7-days of inactivity. Rather than using a nanoflow with a fetch action, you can now utilize XPath directly as a data source. List views, data grids, template grids, reference pickers, and any pluggable widget can benefit from this.

You can design an offline-first PWA by incorporating one of the following new navigation profiles into your app: responsive offline, tablet browser offline, or phone browser offline. The offline profile is loaded by web browsers, currently, Google Chrome and Microsoft Edge, that provide the essential offline functionality. Other browsers revert to the online profile smoothly.

The loop activity presently includes a new function looping through lists based on a condition called “while loop.” It indicates that you will continue to loop through the list till the condition stays true. If the statement returns ‘false,’ the looping is sacked on the spot.

Previously, you had to apply a decision in a loop and a break event. But the Mendix 9 low-code platform has ruled out this time-consuming function. Its optimal ‘while loop’ technique also efficiently creates enormous volumes of test data.

Mendix 9 features a simplified process of adding new React Native modules to your native mobile apps with its latest version. Instead of relying on Studio Pro-supplied or manually-added modules, your pluggable widget or JavaScript action can now specify which native modules it requires. It streamlines the development of more sophisticated and robust pluggable widgets and JavaScript actions for native mobile apps.

When creating a native mobile app for development or delivery, the Mendix Native Mobile Builder will contain the modules. The most recent version of the widget tooling will generate the statement file depending on the requirements for pluggable widgets. Then you have to repackage your widget with the updated tooling. This file must be explicitly created for JavaScript tasks that necessitate native modules.

How does Mendix 9 spike developer productivity?

Enterprise development teams and developers use the low-code platform to design, integrate, and launch robust multi-device apps. About 70% of firms recognize low code as the core of their business.  And more than 60% of developers deploy Mendix Assist’s artificial intelligence features to speed modeling. Artificial intelligence solutions enable developers to produce high-performance apps with excellent user experiences faster and with fewer mistakes.

Mendix 9 low-code platform enables you to digitize any process without the complexity and lengthy procedures that traditional approaches need. It spikes the developers’ productivity by considerably reducing the workload. It offers several perks that make it the ideal low-code platform for software companies. For instance,

Another developer productivity boost in Mendix 9 is Visual Conflict Resolution, which allows for the simple resolution of disputes and merging of changes when teams of developers work in multiple parallel branches. The Mendix UI Kit enables designers to collaborate in Mendix development teams using their favored tools, such as Figma and Sketch.

Further, the new Control Center in Mendix 9 platform features a consolidated view and supervision of the whole Mendix ecosystem – users, apps, and resources to developers. It unifies the tools IT needs to maintain enterprise-level control and governance over applications, data, and users. It includes citizen developers who play a significant role in application development but are less equipped in security, system integrity, and privacy.

Is Mendix 9 a digital breakthrough in the corporate world?

Mendix is the leading low-code platform for digital-first organizations. Set up on the pillars of abstraction, automation, collaboration, and cloud, it significantly enhances developer productivity and emboldens a legion of ‘citizen’ developers to create apps guided by their specific domain expertise. Its latest version provides everything from artificial intelligence and augmented reality to intelligent automation and native mobility. As a result, more and more enterprises deploy Mendix low-code platforms to realign their strategic technology direction and support diverse business needs.

Parangat is a Mendix service provider, that gives a hand in developing software and mobile applications using low-code platforms to assist you in flourishing your venture. Our team promises you a seamless development process with state-of-the-art tools and customizable solutions requiring no manual coding. To know more about implementing the well-equipped low-code platform, connect with Parangat and embrace the new change without hassle!